Here are seven things about the upcoming trial cyclists and pedestrians should know. Feel free to post questions and I’ll do my best to answer them. If you’d like to know more, read the media briefing for more detail on the plans at this Vancouver Sun link, take a look at the city’s lane reallocation technical details web page, or keep it brief with this summary backgrounder. (All images below are from the City of Vancouver reports)

1. Monday, July 13 is the big day. Barriers, lane painting, and roadwork will be done the weekend previous. Expect the bridge to be ready for your morning commute unless bad weather the previous week delays roadwork. Banners reminding drivers of the change will go up on the bridge at the end of the month and a three week media blitz will commence.

2. A particularly nasty section of road where northbound cyclists currently leave the bridge and merge with eastbound traffic on the north side of the bridge should see some improvements — with the addition of a bike lane and bike boxes on the stretch between Burrard and Hornby making it easier for cyclists to use the Hornby Street bike lanes as a route into the downtown core. A slip lane will allow bikers to cross over the eastbound car lane and continue north on Burrard, but extreme caution will be the order of the day as this problematic intersection may yet retain some of its inherent dangers. 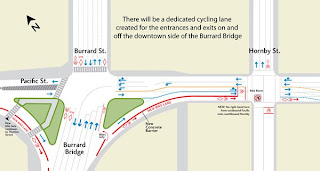 3. All pedestrians will be using the west sidewalk. Apparently, city data suggests two-thirds of walkers already use this side, perhaps because of the ocean view. The best place to get over to the east side of Burrard before you get to the bridge itself is at First Ave. 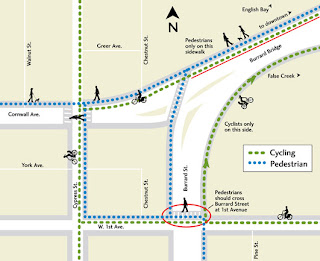 4. Cyclists will have the benefit of barriers on both their protected lanes. With the lack of pedestrians to act as deterrents to excess speed, it will be instructive to see if any new safety issues related to cyclists passing each other arise.

5. Bike lanes on Pacific and Burrard on the northwest side of the bridge should give cyclists a clear route onto their new protected lane of southbound road space on the bridge deck.

6. There was no commitment to an end date, meaning that an unsuccessful trial can be abandoned early, despite assurances from the City that a report will be prepared after three months.

7. Buses heading south on the bridge will see their bus lane extended past Pacific Boulevard, so that buses will have some measure of priority when getting onto the bridge. If transit experiences severe and prolonged congestion problems, engineers may implement special transit phasing of traffic lights at the intersection to keep buses moving.