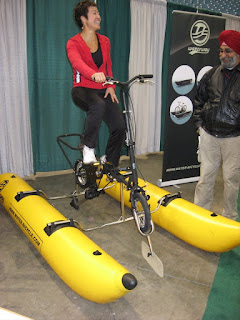 “It will make the chicken debate look calm,” notes Vancouver Councillor Geoff Meggs during the March 18th meeting of the city’s Bicycle Advisory Committee. He’s referring to the expected protestations from drivers, regarding the hoped-for implementation of a two lane reallocation trial on the Burrard Bridge later this year… and referencing the uproar that ensued when council advanced the idea of allowing city residents to keep chickens. And while much laughter accompanies Meggs’ mention of urban poultry, everyone in the room knows the first few days of the lane reallocation may be the make or break moment for the proposal.

And if the trial doesn’t work out, cyclists can all buy water-bikes and still get across False Creek via pedal power without sucking exhaust fumes or dodging pedestrians!

Meggs’ comments come at the end of a report on trial preparations by David Rawsthorne, the city engineer tasked with the unenviable job of balancing the needs of advocates and critics, overcoming traffic flow challenges, and making the reallocation trial a reality. Rawsthorne is here on his day off, fielding questions and concerns from the Bicycle Advisory Committee, and asking the B.A.C. to make a motion formally supporting the two-lane trial. It’s the urban design equivalent of grunt work, the meetings and discussions armchair experts don’t have to engage in when proclaiming their ‘obvious’ solutions to improving a traffic network that moves millions of people around Metro Vancouver every day. Rawsthorne faces a friendly crowd tonight however. Committee members are eager to see this initiative gain momentum.

Two issues dominate the discussion. Identifying the feeder routes that will funnel cyclists to the bridge and ensuring communications between the public, media, and city representatives relay factual information and helpful solutions during the transition.

Advisory Committee members want to make sure that nearby bike routes aren’t flooded with drivers seeking shortcuts, a situation that could actually dissuade cyclists from the most sensible paths to the bridge and likely to raise the ire of area residents. They want the City to identify the best ways to get cyclists to the new lanes and make sure they’re clearly marked. Luckily, monitoring traffic and putting up signage is pretty straightforward. Good data and a small budget are all that’s needed to bring the bikers to the bridge.

Sharing the good news however, may not be as cut and dried. Meggs says council is going to need to know exactly how the trial is going from the outset. The media will be eager for comment. Critics will be ready and willing to exploit any flaws be they real or perceived. Everyone recognizes the threat to the trial inherent in a basic tenet of the news business. “Two Lane Trial Goes Unnoticed” isn’t the kind of headline encouraging one to take a free copy of the papers proffered by orange and green smocked human newsstands seemingly stationed at every busy street corner and transit hub in the downtown core.

And there it sits. No date has yet been set to take the matter before council, but the day approaches. When it does, judging from City Council’s interest in the process, approval seems likely. At that point, it’s a matter of a couple months to put barriers and signage in place and get the trial underway. A big change to the bridge seems imminent. This summer, be it a Point Grey gathering with canapés and champagne, or a Mount Pleasant kegger featuring quinoa and cannabis, determining whether that change is for good or ill is bound to be one hot topic.