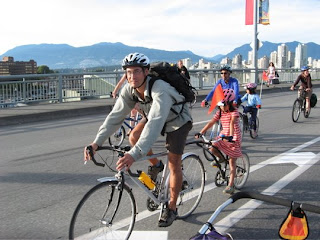 Sustainability is the new black when it comes to catch-phrases. And rightly so. But, are we serious about paying more than lip-service to the concept? We’ll get a better idea of how much commitment local governments have to the idea in March, when transportation consultant Richard Gilbert’s guidelines for sustainable transportation and children are finalized.  In conjunction with kidsonthemove.ca, Gilbert is developing a set of recommendations (pdf) for planners and developers which attempt to put children first when considering the design of our transportation infrastructure.

There’s a lot of great ideas contained within the 27 recommendations so far… and probably quite a hefty bill for the public purse as well. After all, are we willing to keep low enrollment schools open so that kids can limit their school bus riding time to just 40 minutes per day? It’s the kind of decision that’s going to show up on your tax return. Can we show the fortitude to make auto-makers redesign vehicles, in light of the fact that 70% of car exhausts in the country point toward the sidewalk… and directly in the faces of kids walking or in strollers? Are we going to make public transit safe and inviting enough that preteens can travel on buses and subways without a parent?
Of course it’s one of those pay-now or pay-later conundrums and frankly, we seem like pay-later kind of people (as a society) when it comes to reaching for our wallets to address social issues. There’s no doubt we have the ability to fulfill this suggestion by former Bogota mayor Enrique Penalosa, “If we can build a successful city for children we will have a successful city for all people.”
But, do we have the will?