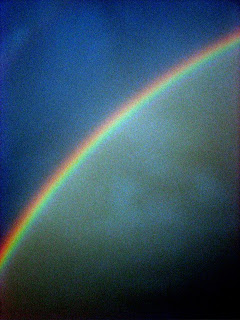 Threw away my vote today. If you think that voting on principle, rather than probability of victory, is wasting your ballot. It felt grand. Tossed it aside the same way a cigarette smoker casually grinds out their butt and walks away from that tiny tube of non-biodegradable whatever that cigarette filters contain.

Coulda spoiled it, or voted for the Marxist/Leninists — to really thumb my nose at the conventional wisdom. But hey, if a great-grandmother who’s willing to go to jail to protect the environment and thumb her nose at the so-called justice system doesn’t deserve a few Xs on election day I don’t know who is. No offense intended for the NDP incumbent in my riding, but she’s probably a lock for the job, so why not vote for someone whose platform is so sensible it couldn’t be seen as anything other than extreme in this crazy, mixed-up world?
A rainbow. Just because.