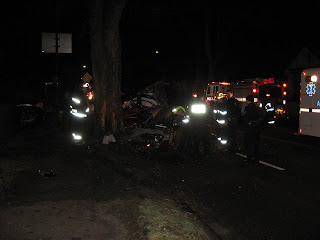 NDP leader Jack Layton says he’ll throw taxpayer money at the Montreal Grand Prix in the hopes of keeping the event alive. Bad, bad idea. So, I wrote a letter to tell him so (see below).
This image was shot at 3:30am in January 2008 a half block from my house. The young woman inside the car (split in two when it hit a tree) died on impact. I believe “Zoom, Zoom” car advertising and auto racing are in part to blame for the carnage on our streets. Glamourizing excessive speed costs society. Who profits?
Mr Layton:

I am aghast that you would consider for even a moment to spend taxpayers’ money to encourage Formula One boss billionaire Bernie Ecclestone to bring his blood-sport celebration of automobiles back to Montreal. There was the same hue and cry over the Vancouver Indy race a few years back, and yet, have you heard of a single hotel closing because it (the Indy) no longer creates a week of traffic hassles and noise pollution so that motorheads can worship at an altar prominently emblazoned with the logos of car, cigarette, and alcohol manufacturers?

If you must spend money on tourism, I suggest you look a little harder. Perhaps the Montreal Bike Festival? Surely the world’s largest bike festival with in excess of 45,000 participants (as opposed to spectators) could use some cash? I can only hope you are pandering to Quebec voters with this position, as it’s the lesser of two evils at this point. I would be sorely disappointed to find out you consider promoting automobile use to be within the NDP’s supposedly progressive platform. As a former video editor at a Vancouver news station I have seen report after report of people killed by excessive speed and street racing. How do you think the (primarily) young men responsible for this carnage get their perception that racing is cool and glamorous in the first place? Car racing may be good for the local economy (a debatable point) but it also most certainly destroys lives and families.

Why don’t you go visit Ms. Nina Rivet of Vancouver and tell her your plans? Then she can show you the pictures of her sister, killed by a young man with a need for speed. Perhaps a look at a few coroners’ photos and a calculation of the negative economic impact of irresponsible car use might encourage you to rethink this terrible idea?

If the FI community, sponsors, and the poor, poor auto makers such as Mercedes, Ferrari, BMW, Toyota, Honda, etc, etc want to race in Montreal so badly, let them find the money from private donors. If you are serious about helping the Quebec economy then I strongly suggest to you that the money would be better spent promoting activities and industries with a future. Auto racing is not among them. Your position on this is a total contradiction of what I (as an NDP voter who is inches away from switching his vote to the Green Party) thought you represented.

I expect way, way better from you Jack. I am made absolutely livid by this news.

I’d say I’m left at a loss for words regarding this issue, but clearly I am not. Please build your party by sticking to your principles, not by offering pay-offs to fickle voters who are only looking for short-term solutions to systemic problems.