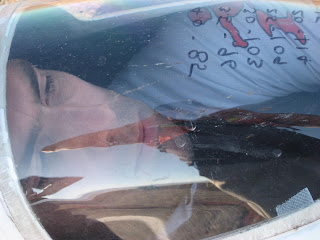 Sam Whittingham, the Canadian cyclist and bike builder who has dominated the sport of HPV racing for nearly a decade, pedaled his Varna Diablo III recumbent bike to a new world record speed of 82.3 mph (132 kph) late Thursday, under conditions that veterans of the World Human Powered Speed Challenge were calling the best they’d ever seen. Whittingham, who has been making this annual trek to the high plains of Nevada since the late 90’s, has been unsuccessful in bettering his 81.5 mph mark for six years. This year however, Whittingham rode the Georgi Georgiev designed and built Varna streamliner through the 200 meter speed trap in just over five seconds, becoming the first person to go faster than one tenth the speed of sound solely under his own power.

“I’ve been knocking on this door for years,” said Whittingham just before his record-breaking run. “I want in!”

He had already posted a 79 mph and 80 mph run during the week of racing (Sept. 15 – 20) but the achievement also means a big payday for Sam, as he will claim the $26,748 deciMach prize as the first rider to clock an 82 mph top speed on the long, flat stretch of highway outside of Battle Mountain known as SR 305. What makes the achievement even more remarkable, is the fact that it was Whittingham’s second run of the day, after an 80 mph run in the morning. In a sport where the riders are usually pulled from their machines so oxygen-starved that they can barely stand, after five minutes of maximum pedaling effort inside an aerodynamic capsule with little or no air circulation, one speed run a day is the norm — to allow time for their bodies to recover. Whittingham could conceivably have ruined his chances of a better run on Friday or Saturday with the double duty, but unlike many Nevada wagers, this one paid off.

Hot, still air is ideal for pushing the enclosed recumbent bikes to their maximum speed — exactly the conditions that prevailed Thursday evening. Whittingham, who is a household name in this little-known sport, had a picture-perfect start, quickly disappearing from sight amidst the heat shimmer of the arrow straight, two lane blacktop road. Just five minutes later Whittingham tumbled out of the bike to wild cheers from spectators and volunteers, cementing his claim to the title of world’s fastest man.

Whittingham has crashed at over 70 miles per hour before, with the Varna alternately bouncing and flying down the highway, like a stone skipped over a pond. He’s ridden the Battle Mountain course more than anyone. But even without the record-breaking achievement to make it memorable, Thursday night’s run is one Whittingham will never forget.

“I was flying down the course, but I was getting bumped around like crazy,” said Whittingham after the run. “That was one of the scarier runs of my life, because I’ve never gone that fast ever before!”

Nor for that matter, has anyone else.