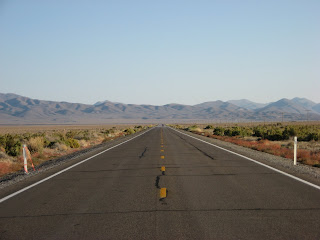 Good conditions prevailed on Monday, during Day One of competition at the 2008 World Human Powered Speed Challenge, with riders posting very respectable times and looking forward to even higher speeds today.

Once again the Varna machines have proven themselves – Georgi Georgiev designed bikes delivered the top two speeds in the men’s division , with a Varna clone built by Steve Nash clocking the fastest woman’s run.

Perennial favourite Sam Whittingham has to feel good about his chances to crack the 82 mph deciMach barrier (one tenth the speed of sound) this year. Whittingham went through the speed traps in the Varna Diablo III at 79.76 mph to post the fastest speed on the day and the third fastest run ever. With four more days of racing on tap, it appears this could be the year the Canadian makes history. Hot on his heels and eager to dethrone the genial king of Battle Mountain however, are American Fred Markham and Hollander Hans Wessel. Markham posted a top speed of 70.02 mph in his Varna Mephisto to take second place on the day and become the fastest over-50 rider in history, while Wessel was a close third, clocking a top speed of 68.48 in the Mertens/Van Vugt Speedhawk. That effort has given Wessel the title of second fastest European rider ever. Only Damjan Zabovnik has gone faster… and he’s not here this year, so Wessel has the top spot in his sights.

Ellen Van Vugt was the only female rider on the course on Monday, but she didn’t let lack of competition quench her thirst for speed. Van Vugt rode her Steve Nash-built Varnowski at a speed of 57.70 through the timing area… the sixth fastest time overall.

Conditions for Tuesday are again looking ideal, with clear skies and hot temperatures forecast. Event Organizers Al and Alice Krause will let the racers make their runs as early as possible in today’s afternoon session, hoping hotter temperatures will let riders take advantage of the higher speed potential available when they slice through the warmer air in their aerodynamic machines.
Monday Results – Human Powered Speed Challenge 2008, Battle Mountain NV
Below, shaky video of Whittingham and Markham. Today I’ll be standing further away and hoping to improve MY performance, as a cameraman chronicling the exploits of these daring and creative teams.