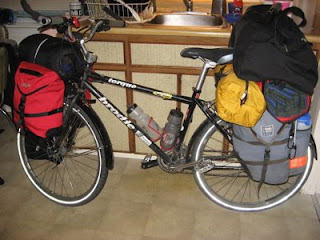 One of my favourite films is the Spencer Tracy classic Bad Day At Black Rock. It’s not about someone taking the brown acid at Burning Man. It’s set in a tiny town in the Arizona desert. In the opening scene, Tracy disembarks with just a suitcase, at a small train station in the middle of nowhere. Luckily for him, he isn’t going to Battle Mountain, Nevada and bringing a bike, a laptop, a couple of cameras, camping gear, clothes for two weeks on the road, extra water bottles, bike tools, etc, etc. Because if he was, he’d have to disembark at Reno. As will I. 168 miles from where I’m going, rather than the 50-ish miles I’d be riding if the nearby town of Winnemucca had a train station.

In planning my trip I sought advice from the Washington Bike Alliance. Mark Canizaro helped me figure out which bus I could take from Everett to downtown Seattle (Thanks Mark!)… but it was his offhand remark about boxing my bike for the Coast Starlight train trip from Seattle to Sacramento that sent me scrambling to the Amtrak website. In reserving my tickets, the agent told me airily I could put my bike on the train as “checked baggage”. I imagined the delightfully convenient experience of rolling my bike onto some special freight car, (a service they do offer on some trains) racking it, and marveling at the forward-thinking nature and 21st century-ishness of such an experience. Alas, it is not to be. I’ll be pulling off pedals, loosening handlebars, turning down bar-ends, and generally monkey-wrenching to get my machine box-ready for the trip. Which is a drag, but so it goes. The real hassle is the lack of train station at Winnemucca, which means if you want to get off there, all you can take with you is two pieces of carry-on luggage. Cue the extra hundred miles of riding. With what seems like a hundred pounds of bike and gear. Nevada is pretty flat right? How hard can self-propelled, online reporting from obscure places on the high plains of the continental U.S. be anyway? Let’s find out.